You Are Here: Home|Robotics Challenge 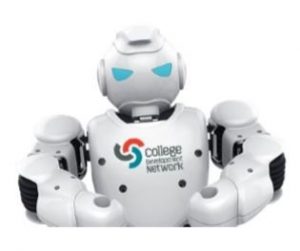 We’ve been wanting to do something with robotics for a while now, so when we came across Digital Maker CIC, we were delighted to find a partner that was enthused as much as we were about the potential of AI and automation.

Our first venture was to organise a Robotics Challenge workshop which Dundee & Angus College were kind enough to host for us. We were joined by 20 staff members from colleges around the country to build (from scratch), programme and participate in a series of challenges.

Robotic kit can be expensive, but we wanted to focus on affordable technology so based the workshop on the PiWars model, which makes use of a Raspberry Pi Zero (£9.30 with wifi, £5 without) combined with a £18 CamJam EduKit #3 Robotics kit.

Forming teams of 3, they got to work on the first challenge, wiring up the robot and hooking it up to a computer so that they could start programming simple movements to explore the space in the room.

The teams were presented with limited instructions, encouraged to draw upon their own experience and creativity to build their robots. It was interesting to see how each team approached the task in different ways, changing the basic design (the layout of sensors) or by grabbing whatever lay to hand (adding rubber bands to tyres to improve traction). Before long, the robots were becoming aware of their surroundings and reacting to objects.

There’s no stopping this robot (unless it runs into a black line) at the Robotics Challenge @ColDevNet @digitalMakerCIC pic.twitter.com/3buKzSCi84

The first challenge was to get the robot to complete a lap on its own around a winding track, relying only on a single IR sensor to find its way. The team that completed in the fasted times would win bragging rights (and the envy of their peers). It seemed like a simple task, but as the teams discovered working out how to keep to a line and more importantly, find a line again after losing it, proved to be quite difficult. We discussed various strategies.

How do dogs follow a scent path? Will our robots do any better at the Robotic Challenge? @ColDevNet @digitalMakerCIC pic.twitter.com/VoExTfYas9

Teams were made up of various academic disciplines, with an emphasis on engineering and computing, but even with the significant expertise in the room, people struggled to come up with a working solution. It was a pretty long day – around 6 hours working solidly on getting their fledgling robots around the track (many chose the option of a working lunch).

It wasn’t smooth sailing, motors would operate to varying efficiencies meaning that teams had to tinker with the code or work out how to jury-rig the mechanics to get the robot around the course. Connections came lose, code wouldn’t work, and even when everything else seemed to go right, an uneven surface on the track would throw off a robot just before it crossed the finishing line.

It’s not an exaggeration that some amount of frustration was felt by our teams, with one team member pausing to reflect how his own students felt when faced with what seemed like an ‘impossible problem’. As time wore on, teams were poring significant effort into their robots.

Building the robotic future isn’t for the faint-hearted; lecturers hard at work at our Robotics Challenge @ColDevNet @digitalMakerCIC pic.twitter.com/0v643lInCZ

With all that effort, it was only a matter of time before we had our first, second, third and then fourth breakthroughs (though some left it to the last few minutes for their moment of triumph). There was a tangible sense of success to make it around the track – and we were quite strict about timings, with penalties applied for any physical interventions.

Still, we had to have a winner on the day …

So, what’s next for CDN – well, I’d like us to run another Challenge workshop; participants at the first workshop offered useful feedback around what worked and what didn’t, and how things could be improved if we ran it again.

I’m also keen to run a national competition around the PiWars model – a College PiWars if you will; bringing together teams of staff (and teams of students) to represent their colleges and face off around a series of challenges. It’s a good opportunity to bring together cross-curricular teams, explore how we can fit automation and AI into the curriculum (which many colleges are already successfully doing) and see who can claim the crown of College Robotics Champion.

I’ve also been talking with Digital Maker CIC about running IoT (Internet of Things) workshops where we could use similar kit to demonstrate how we can hook up Raspberry Pis to sensors to deliver real-time data to the cloud and develop simple student activities to demonstrate how the technology works in a range of subject areas, everything from healthcare to hospitality.

We’re also working with the University of Stirling on a free Data Science course specifically for college lecturers and support staff – look out for more details shortly.

When is this all going to happen? Well, if it was down to me, then it would all be happening yesterday – AI and Automation is going to impact on almost everything we do, the time to get involved is now. If you’re interested in learning more or have an idea of how you could contribute, we would be delighted to hear from you. Just drop me a line at kenji.lamb@cdn.ac.uk