You Are Here: Home|Kevin Murphy inducted into College Hall of Fame 2021

Kevin Murphy inducted into Hall of Fame at College Expo 2021 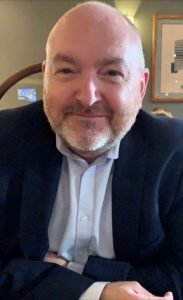 Many people across the college sector and further afield will know Kevin Murphy and will have been shocked and saddened by his sudden death in January 2021, aged just 49.

Kevin was a product of the college sector. Starting his career with Fife Council as an apprentice painter, he studied at Fife College in the early 1990’s. After a spell pursuing his trade, he joined Fife College and then Dundee and Angus College as a part-time lecturer in painting and decorating. This was a short-lived spell as just a few weeks later the only other painting and decorating lecturer at Angus left and Kevin found himself ‘promoted’ as the full-time subject expert.

Kevin relished this opportunity, approaching it with his customary positivity and enthusiasm. He quickly worked his way through the ranks as Course Leader, Curriculum Manager and then Director. Like many others in the college sector he enhanced his qualifications along the way, completing his TQFE and a Post-Graduate in Leadership and Management.

A proud ‘tradesman’, Kevin’s natural place was amongst the trades curriculum and he was the driving force behind the Angus Shared Apprenticeship scheme, an innovative social enterprise that supports smaller employers to share the training and development of apprentices between them and increases opportunities for young people in rural communities.

His pioneering work as part of the Tay Cities Deal is now coming to fruition, supporting a multi-million pound investment in precision engineering for the region.

Whilst his heart lay with the trade curriculum, Kevin was also a powerful advocate for the critical role of the Essential Skills in everyone’s learning journey. This was something that he had experienced himself through his own learning journey and was why he championed the need for Essential Skills to be at the heart of college learning in every vocational discipline and at every SCQF level.

As the long-term Chair of CDN’s Essential Skills and Volunteering Network, Kevin was committed to improving the profile and uptake of Essential Skills at every opportunity. This was a role he relished and was one that he tackled with his genuine care for others, his never-ending positivity, and his focus on what was in the best interests of all of our learners.

“I am hugely proud and so grateful to everyone at CDN for the induction of Kevin Murphy into the CDN College Hall of Fame.

Kevin represents the very epitome of what colleges are all about. He lived and breathed FE and was so passionate about the service we provide to our learners, and about their development irrespective of the barriers they faced.

Kevin knew how colleges could change lives and strived to ensure that every learner he encountered had the best experience possible. He was a true advertisement for the college sector, a gentle man, a family man and someone who loved a chat and a story. No matter the situation, Kevin was always positive, upbeat and future focused. He believed passionately in the role and value of colleges and his sudden and untimely death has robbed the sector of one of its stars. We miss him greatly.”

In this video, Kevin’s brother Mark pays tribute to him.

Click here to see all Hall of Fame inductees